Congratulations to Grand Champion Midsummer Knite.    – Now retired from breeding, K2 gained his first PC today as a neuter and won all his classes including Best of Breed.  He is such a sweet natured boy. 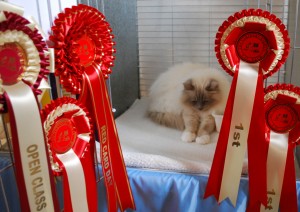 We would also like to congratulate Champion Felonie Knite Toremember  also known as “Charlie”who gained his title in in three straight shows. Thankyou to his owner, Angie Walker who shows him so well. 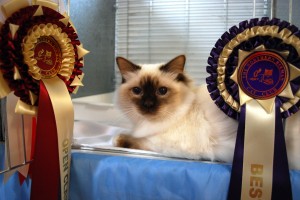 I have been breeding Birman Cats for 25 years, I show cats at GCCF cat shows in the UK. I have very high standards and breed for quality and temperament.
View all posts by Tina Mason →
This entry was posted in Uncategorized. Bookmark the permalink.